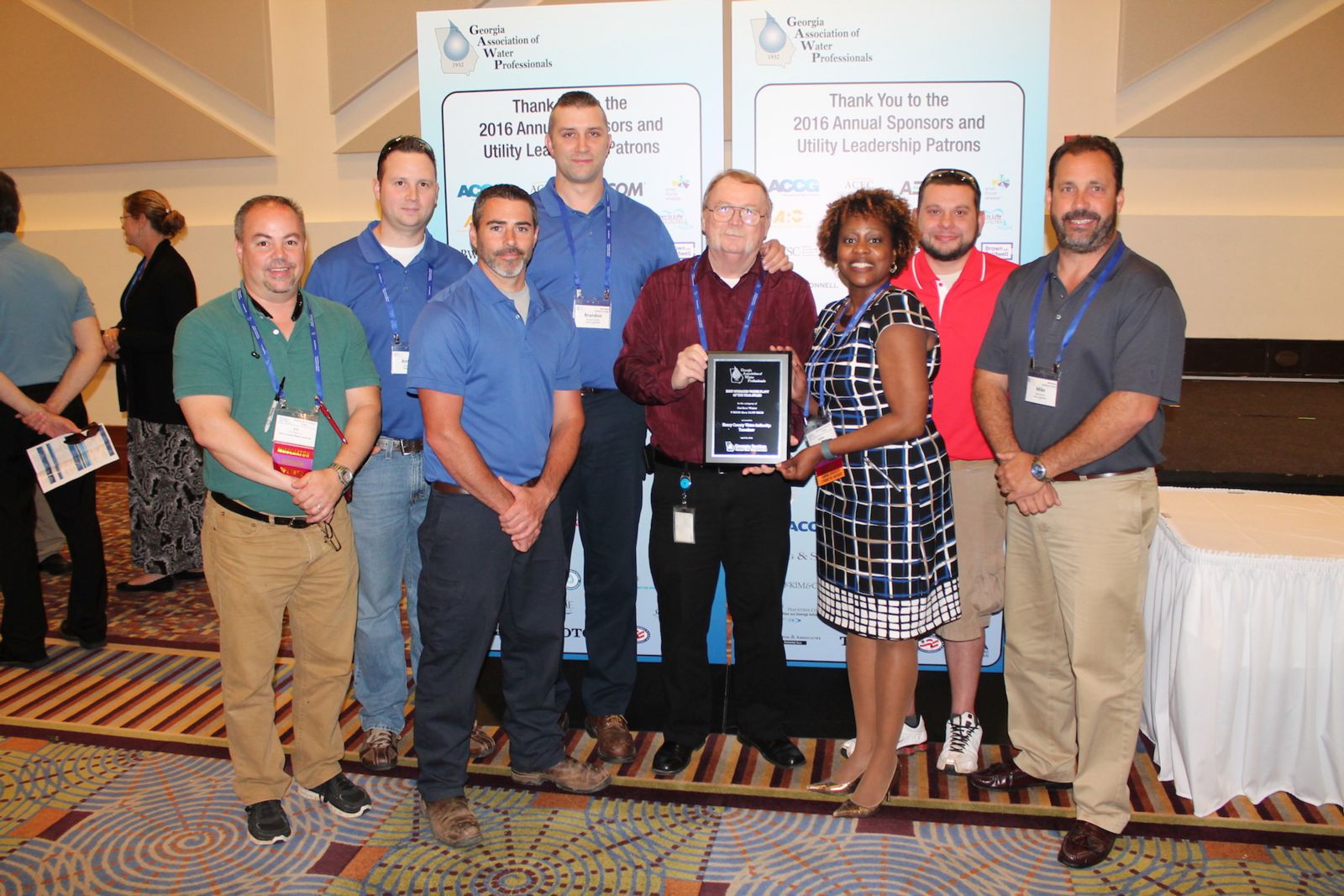 (May 16, 2016)  While spring marks the start of the baseball season, the Spring Conference of the Georgia Association of Water Professionals (GAWP) likewise kicks off the year for awards and recognition of the best of the best water utilities in the state.

During the recent GAWP Spring Conference in Columbus, the Henry County Water Authority (HCWA) started its season with a clean sweep of the awards for the best operating water and wastewater plants in Georgia.  In addition, the Authority’s Alex McCart won the Georgia Section of the American Water Works Association’s (AWWA) Meter Madness Competition.

Opening for water production in 2007, the HCWA Tussahaw Plant has a finished drinking water capacity of 13 MGD.  It is one of two water production facilities utilizing raw water from five HCWA reservoirs to serve approximately 57,000 water utility customers.

As a testament to their continual performance excellence, both the Tussahaw and Towaliga Water Plants received 2016 GAWP Platinum Awards for 100% permit compliance – that is, no operational permit violations – for nine straight years.

This year, the HCWA Bear Creek Water Reclamation Facility became a three-time GAWP Plant of the Year winner, repeating the feat from 2012 and 2014 previously.  In fact, the HCWA has produced the state’s best wastewater plant in seven of the past eight years.

The Authority’s other wastewater treatment plants – the Indian Creek and Walnut Creek Water Reclamation Facilities – have received the GAWP Plant of the Year Award twice each, with Indian Creek winning in 2009 and 2011 and Walnut Creek in 2013 and 2015.  During the GAWP Spring Conference, Walnut Creek received a 2016 Platinum Award for seven straight years of 100% permit compliance.

The GAWP selected Bear Creek this year as Georgia’s best wastewater plant in the category of Non-discharging LAS with 1.1 to 10 MGD of wastewater treatment capacity.  The Bear Creek Plant was constructed in 1997, but received a major expansion in 2009.  Its current wastewater treatment capacity is 1.25 MGD, necessary to serve nearby Atlanta Motor Speedway.  Bear Creek, which received a GAWP Gold Award this year as well for 100% permit compliance, has a Land Application System (LAS) to spray treated wastewater through nearly 1,400 sprinklers on over 230 acres of protected green space.

Rounding out the HCWA honors during the 2016 GAWP Spring Conference was Alex McCart, by bringing home the Georgia Meter Madness Championship.  McCart, who is a water loss technician for the HCWA, won the competition with an average time of 14 seconds.  Contestants have three attempts to assemble a standard residential water meter as quickly as possible, with judges timing each trial.  The water meters must be functioning – they are tested for assembly integrity – before contestants are credited with a successful attempt.

As a result of winning the statewide Meter Madness Competition for Georgia, McCart receives an expense-paid trip by AWWA to attend its “ACE-16” – Annual Conference & Expo of the Association, which will be held June 19-22, in Chicago.  As the Meter Madness Champion of the Georgia Section of AWWA, McCart will compete against other state sectional winners for the title of National Meter Madness Champion.