(McDonough, GA – Jan. 25, 2017) Why is water conservation important? Metro Atlanta middle school students were asked to research and write about this topic as participants in the 2016 Middle School Essay Contest of the Metropolitan North Georgia Water Planning District (Metro Water District). It’s a salient message for customers of the Henry County Water Authority (HCWA) as well, which partly explains the utility’s involvement in this annual event. 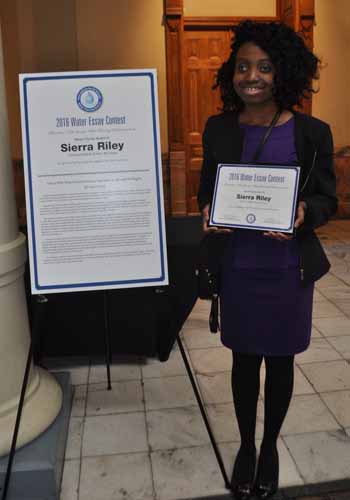 Sierra Riley, an eighth grader at Woodland Middle School, was selected as the Henry County winner of this year’s Metro Water District Essay Contest. Riley was among the winners from 15 counties, as well as the City of Atlanta, recognized at the Georgia State Capitol last month for their outstanding essays.

With the Essay Contest asking students to research and write about the topic of water conservation, the exercise was especially timely as North Georgia faced drought conditions this past summer that continued well into fall and the New Year.

Riley and the other local winners received a $100 prize, while an overall District winner received an additional $400. The students submitted a 300- to 500-word essay on the specific topic of: Why is water conservation important to you and to our region?

“Choosing the contest winners is always a challenge because all of the essays display a genuine awareness about the importance of water conservation,” says Kostoula Vallianos,

Principal Education Program Specialist for the Metro Water District. “This year’s essays were particularly timely since the region is experiencing a drought that has resulted in the Georgia Environmental Protection Division declaring a Level 2 Drought Response, currently,” she says.

The annual essay contest is one of many educational outreach initiatives conducted by the Metro Water District to raise awareness about the region’s conservation efforts and the importance of the preservation of water quality in metro Atlanta.

“We encourage participation in the Essay Contest because of our participation in the Metro Water District and our ongoing partnership in efforts to educate the public on the importance of protecting and preserving the water resources of our system,” says Tara Brown, HCWA Environmental Compliance Coordinator. “The essays also reflect the willingness of our local students to become more involved in water conservation and wise water use advocacy here at home.”

The HCWA is involved in the Metro Water District because of its dedication to developing comprehensive regional and watershed-specific water resource planning being implemented locally in cooperation with the collective interests of the region. The plans of the Metro Water District and its members are intended to conserve public water supplies, protect water quality and recreational values of water bodies, and minimize potential adverse impacts of development on public waters within and downstream of the region.