(McDonough, GA – Feb. 15, 2017) The Henry County Water Authority (HCWA) welcomed two new Board Members and selected a new slate of Officers during its January Meeting, when all five Members were sworn into office by Kelley S. Powell, Probate Judge of Henry County. The Members of the HCWA Board are appointed by their respective Henry County Commissioner to represent each of the five Districts within the County. 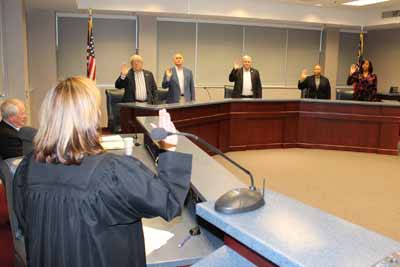 Locust Grove resident Warren Holder was appointed by newly elected Commissioner Johnny Wilson to represent the citizens in Henry County’s District 1 on the HCWA Board. Mr. Holder joins Roslyn Williams, who was appointed by newly elected Commissioner Dee Clemmons to represent the citizens of District 2, as the most recent additions to the Authority Board.

With these two new appointees added to the ranks of the three existing Authority Members, the HCWA Board selected its slate of Officers to serve in leadership roles for 2017. Jimmy Carter will again serve as Chairman of the Authority, alongside Harold Jenkins as Vice Chairman and Carlotta Harrell as Secretary/Treasurer. The Board also requested that Kimberly Turner Osborne continue as Clerk.

“I’m honored to be able to serve the area of our county where most of our raw water resources are located,” says Holder. “I will do my best to protect and manage these resources, while serving our citizens in the best possible way. I am familiar with the Authority and its role in the development of our county, since water and sewer are critically important to our community.”

Mrs. Williams has been a Stockbridge resident for two years. She has over 10 years of experience working with children and youth as the founder and CEO of Ethnic Etiquette Training Center. Her organization provides etiquette training for individuals and groups, teaching them how to conduct themselves in society, according to social codes. Mrs. Williams also assists her husband Rick in offering fitness and nutritional training for youth by utilizing their fitness game – Bodybreaker.

“I’m familiarizing myself with the history of the Henry County Water Authority, and I’m discovering that it is a well-run machine with great leaders and staff who have a wealth of experience,” says Williams. “I hope to develop a respectful working relationship with my colleagues, while bringing my gifts and talents to the community service opportunities at the Authority.”

During 2017, the HCWA Board will be guided once again by Henry County native Jimmy Carter, who represents citizens in District 3. Mr. Carter, who is a sixth-generation resident of Henry County, has 12 years of experience on the HCWA Board. Prior to that, he spent 18 years as an elected Member of the Henry County Board of Education, which included service as Chairman. He is founder and owner of his family’s Southern Belle Farm, a popular tourist attraction and agri-business in McDonough.

Harold Jenkins, who is a 30-year resident of Henry County, is beginning his first term as Vice Chairman of the HCWA Board. Mr. Jenkins has served as an Authority Member since 2013, representing the citizens of District 4. He is the owner of the Jenkins Agency, which provides clients with auto, home, and business insurance products and services.

HCWA Secretary/Treasurer Carlotta Harrell, who serves as the Chief of Staff for Henry County Commissioner Bruce Holmes, represents citizens from District 5 on the Authority Board. Her career in consulting includes service currently as a Project Manager for the Georgia Conference of Black Mayors. She also has experience consulting additional government entities, agencies, and non-profits. Prior to her current work in project management and consulting services, she served 20 years in law enforcement in the State of Georgia.