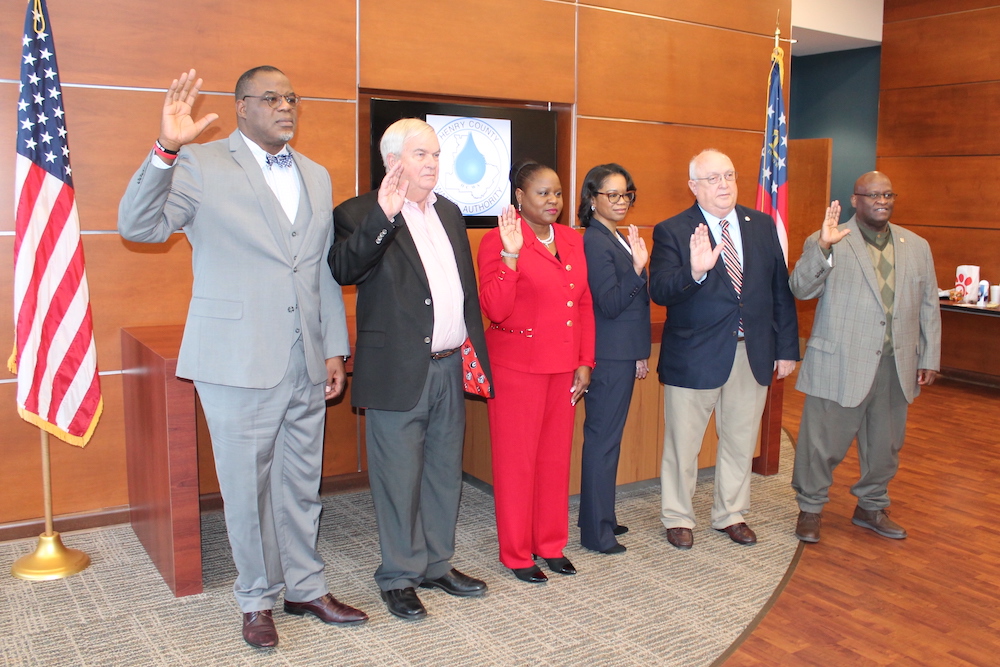 During the January Meeting of the Henry County Water Authority (HCWA) Board of Directors, the governing body welcomed two new Board Members to its ranks, while selecting Officers to lead the Authority this year.

In addition, the HCWA Board selected Jimmy Carter to serve the Authority as Chair this year, accompanied by Sandra Rozier as Vice Chair and Lott as Secretary/Treasurer. During its January Meeting, the Authority Board also recognized outgoing Chair and former District 2 Member Cletonya LaGrand and former Secretary/Treasurer and District 5 Member Siddiqa Gibson for their years of service to the award-winning utility. 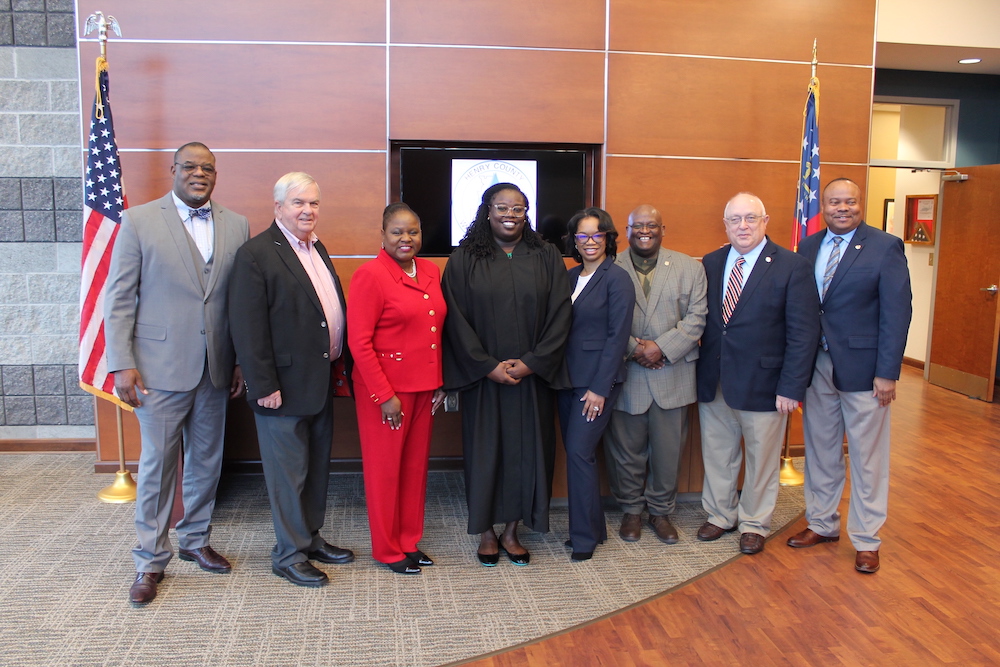 Also during the January Meeting, new and returning HCWA Board Members were sworn into office together by the Hon. Holly Veal, Judge, Henry County Superior Court.

While new to the HCWA Board, Holmes is not new to Henry County governance or public service. He has a history of helping others and giving back to his community, as reflected in his 12 years of service on the Henry County Board of Commissioners, which included several policies and initiatives in the areas of public safety, quality of life, transportation and infrastructure, business development, and more.

After his first election to the Henry County Commission in 2010, Holmes established the Commissioner Bruce Holmes Youth Foundation (CBHYF) aimed at guiding youth in the community in a positive direction. 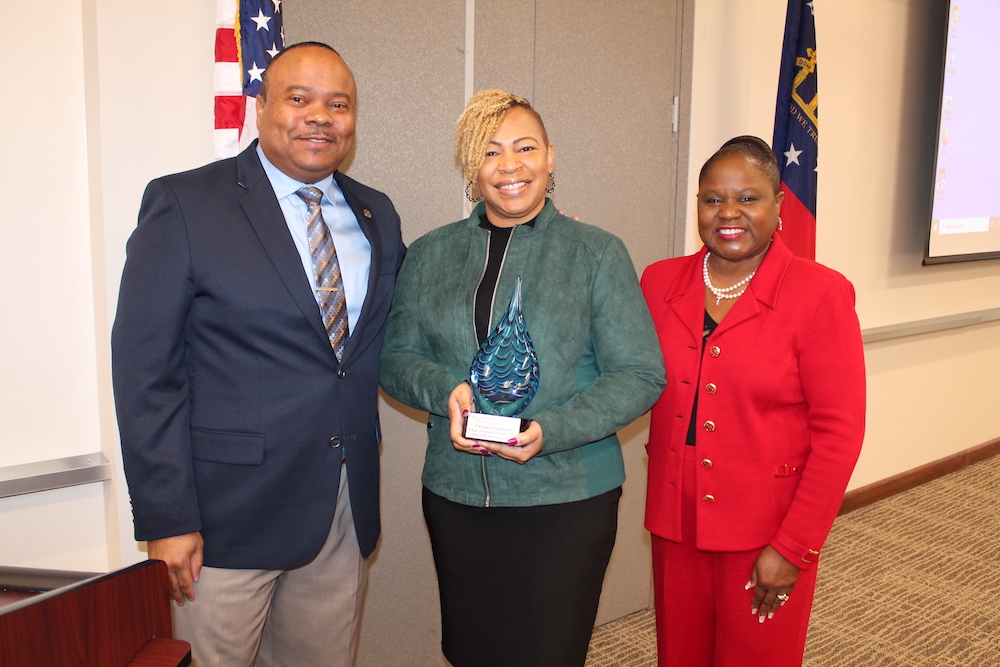 Lott is a Professional Project Manager with over 30 years of experience in banking operations and implementations. She is an accomplished and motivated leader, exemplifying strong organizational and documentation skills, as well as a problem-solving expert who drives high performance for meeting budgets, goals, and deadlines. Additionally, she is customer service oriented, fostering relationship building of teams, colleagues, and clients. 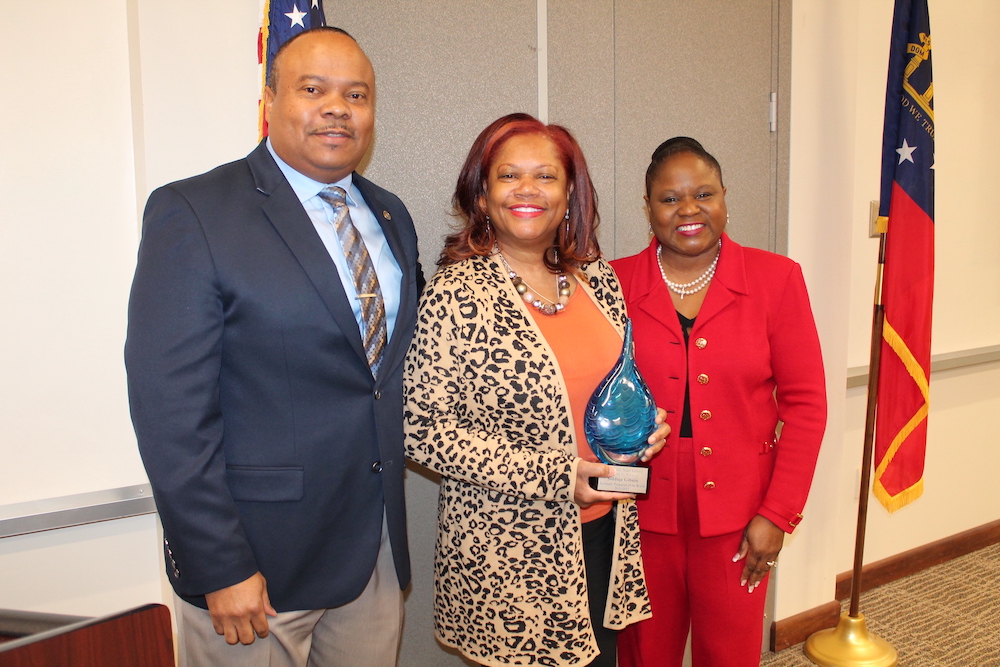 Carter joined the HCWA Board in 2005, and he has served previously as Chairman. He and his family own and operate Southern Belle Farm in McDonough. Rozier also previously served the Authority as an Officer, becoming the first African American and Female Vice Chair when she began her tenure on the Board in 2021. She is an entrepreneur and CEO of TeamHOPE, LLC.

The complete profiles on all HCWA Board Members are available under the "About Us/Board Members" tab atop this website.

Captions for Photos (top to bottom):

The 2023 HCWA Board of Directors being sworn during the January Meeting include (L to R): Bruce B. Holmes, District 2; Jimmy Carter, District 3; Sandra Rozier, District 4; Myra F. Lott, District 5; Warren Holder, District 1; and Fred Mays, Member-at-large. Mr. Carter was later selected to serve as Chairman this year, with Mrs. Rozier as Vice Chair and Mrs. Lott as Secretary/Treasurer.

The Hon. Judge Holly Veal (center) and HCWA General Manager Tony Carnell (far right) join the 2023 HCWA Board Members following their swearing in at the January Board Meeting.

During the January Board Meeting, HCWA General Manager Tony Carnell (left) and Vice Chair Sandra Rozier (right) present a gift to outgoing Chair Cletonya LaGrand (center) for her years of service on the HCWA Board.

In addition, Mr. Carnell and Mrs. Rozier presented outgoing Secretary/Treasurer Siddiqa Gibson with a special gift for her years of service on the HCWA Board.